Retale is out! Befriend coworkers or be eaten by them! Explore what its like to work in a store and find out what's going on in the company that's making everyone so sad! Serve customers and experiment with peoples feelings! Meet Ava, Spike, Asher and many more in a story that'll take you all the way from the interview to the till to the lives of everyday furries! 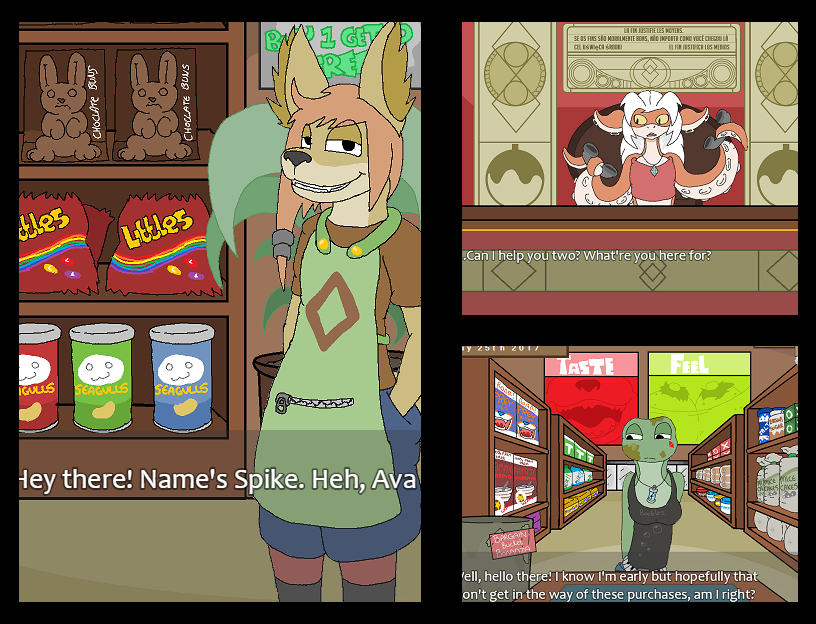 Review:
I have played through the first game of the series once more. I can say, it has not changed my first impressions much. I remember playing it when it had just came out. It has not changed as well. I have not played the "Hotfix" version, but I can say for certain: the majority of the errors, which were causing my confusion during my first playthrough stayed where they were.

In the afternoon of the fourth day all customers repeat the previous buyers' phrases, as if their own phrases do not exist or were lost in the code. And these "borrowed" phrases are mixed and sometimes do not match the action the player has done. When the protagonist denies the frog's purchase, since she does not give enough money for the transaction, she seems to be amazed that her card is still valid. The next consumer copies the red bird's (the third customer from the first half of the day) behavior, and so on. It is the most obvious bug in the game.

One may also point out, that some important things never became apparent from the game itself: should the player accept all types of cards, or should they deny certain card types — the PageUp booklet never brings any updates about which cards should be accepted and which — denied. The same goes for the instances, when the customer wants to pay with card, but then they claim they should have gotten change (is it some special trait about the American card payments?). Or, for example, when the customer wishes to return the goods on receipt, and the game asks whether or not we should give change.

Another question is associated with the character's "skill" one may find in PageDown menu: "I'm sorry". If one tries using it the game simply crushes once the menu is closed, even though the skill's description made me believe it was supposed to either be used when the buyers do not have enough "stress" time or to expand the interaction possibilities with customers.

Even though it makes the most of "retail employee simulator" part of the game a little non-obvious, counterintuitive, confusing, in general it is a great game. Everything about the "Dates simulator/Visual novel" part works wonderfully. The characters are curious to explore and nice to interact with. They remember about the previous encounters to a certain degree and it influenses their phrases. For example, if the player claims, while being a guest in Spike's house, that "he came from a prosperous family", he is going to address the player as "rich boy" later. Of course, such details make the player glad. There is some critique too, though. The way characters are presented to us through the plot is far from orderly. For example, the player may go through the majority of plot, never encountering and getting to know such characters, as Asher and Cassie. The reason for that would be the fact there are some moments in the game where the player may choose from some options and if the protagonist decides to socialize with one character, he is going to deprive oneself from giving any attention to others. As a result, when the time comes for the player to interact with them, because the plot demands it, the player may know nothing about them. I managed to avoid it by differentiating between the characters and playing through the plot several times. However, other players might consider it a negative trait, so I decided to mention it.

I am glad. This game is a piece of art, it has some nice thoughts to share and strong moments to impress. The ending may be unrealistic, but, if we consider it from the point of view of morals and interpersonal relations, it is genuinely wonderful. If I am allowed to bring this up: the scene when the heroes go up to meet the higher ranks while "Let my people go" plays in the background still gives me positive thrill.

As a separate whim, I can point out Eli seems to have too little presence. He seems to have been used as a plot instrument, and then tossed away, into oblivion, as an excess element or a toy which has bored a child. Should he have been mention in the next games or appear in any other scene in this game (for example, he could come to the picnic all the employees have in order to say in person, that he is sorry for everything that happened and wishes to make peace, reconciliate with everyone, who might have sustained damage from his decisions), the ending would be more thoughtful and touching, and the plot would flourish even better. It might have given some more depth to Ava character as well. Of course, it is just my personal view, it does not mean much.

Whatever my thoughts would be, it is Symbol's bold and firm debut in the world of game design. An inspired, good product. The thing the artist wished and could make. We cannot ask for more: it would be criminal and unrealistic. A great game, which has given me many memories and pleasant, good experience. For this, my sincere thanks to the team of the developers and testers!